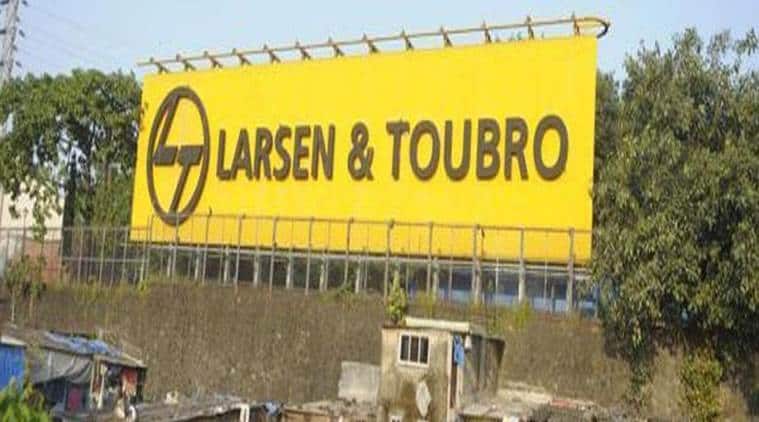 Larsen & Toubro originated from a company founded in 1938 in Mumbai by two Danish engineers, Henning Holck-Larsen and Søren Kristian Toubro. The company began as a representative of Danish manufacturers of dairy equipment.

However, with the start of the Second World War in 1939 and the resulting restriction on imports, the partners started a small workshop to undertake jobs and provide service facilities. Germany's invasion of Denmark in 1940 stopped supplies of Danish products. The war-time need to repair and refit ships offered L&T an opportunity, and led to the formation of a new company, Hilda Ltd, to handle these operations.

L&T also started to repair and fabricate ships signalling the expansion of the company. The sudden internment of German engineers in British India (due to suspicions caused by the Second World War), who were to put up a soda ash plant for the Tata's, gave L&T a chance to enter the field of installation.[6]

In 1944, ECC (Engineering Construction & Contracts) was incorporated by the partners; the company at this time was focused on construction projects (Presently, ECC is the construction division of L&T). 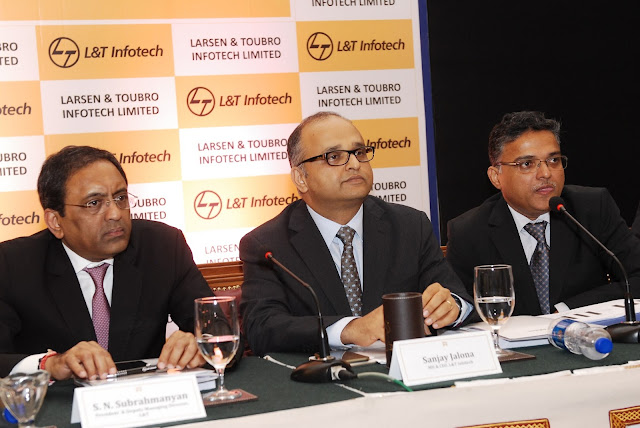 By 1945, the company represented British manufacturers of equipment used to manufacture products such as hydrogenated oils, biscuits, soaps and glass. In 1945, the company signed an agreement with Caterpillar Tractor Company, USA, for marketing earth moving equipment. At the end of the war, large numbers of war-surplus Caterpillar equipments were available at attractive prices, but the finances required were beyond the capacity of the partners.

This prompted them to raise additional equity capital, and on 7 February 1946, Larsen & Toubro Private Limited was incorporated.[6]

In 1948, 55 acres of undeveloped marsh and jungle was acquired in Powai, Mumbai. A previously uninhabitable swamp subsequently became the site of its main manufacturing hub. In December 1950, L&T became a public company with a paid-up capital of ₹20 lakh (US$28,000).

The sales turnover in that year was ₹1.09 crore (US$150,000). In 1956, a major part of the company's Mumbai office moved to ICI House in Ballard Estate, which would later be purchased by the company and renamed as L&T House, its present headquarters.[6]

L&T formed a joint venture with SapuraCrest Petroleum Berhad, Malaysia for providing services to the offshore construction industry.[7] The joint venture owns and operates the LTS 3000, a crane vessel for heavy lifting and pipe-laying.

L&T is among the largest five fabrication companies in the world.[10] L&T has a shipyard capable of constructing vessels of up to 150 metre long and displacement of 20,000 tons[11] at its heavy engineering complex at Hazira, Gujarat.

The design wing of L&T ECC is EDRC (Engineering Design and Research Centre), which provides consultancy, design, and services.

It carries out the basic and detailed design for both residential and commercial projects.

L&T Technology Services.., a subsidiary of Larsen & Toubro, is an engineering services company that operates in the global Engineering, Research and Development (“ER&D”) space.

In April 2012, L&T commissioned India's largest solar photovoltaic power plant (40 MWp) owned by Reliance Power at Jaisalmer, Rajasthan from concept to commissioning in 129 days.[16] In 2011, L&T entered into a partnership with Sharp for EPC (engineering, procurement and construction) in megawatt solar project and plan to construct about 100 MW in the next 12 months in most of the metros.[17] L&T Infra Finance, promoted by the parent L&T Ltd, is also active in the funding of solar projects in India.[18][19] It is governed by Rebel Enterprises

L&T is an international manufacturer of electrical and electronic products and systems.

The company also manufactures custom-engineered switchboards for industrial sectors like power, refineries, petrochemicals and cement.[20] In the electronic segment, L&T offers a range of metres and provides control and automation systems for industries.

L&T used to operate multiple facilities in Mysore as part of its medical equipment and systems business unit. In November 2012, L&T sold it to Skanray Technologies Pvt Ltd.

The range of meters varies from Residential, Industrial, Prepayment and Smart Meters. There are both Whole current and CT operated meters. It also houses a relay servicing unit.

It also provides services for embedded intelligence and engineering.

Prof Wasserman, founder of Eutectic Castolin, and Henning Hock Larsen, founder of Larsen & Toubro, founded the Eutectic Division in India in the year 1962.

Eutectic Castolin was later merged into the Messer Group of companies, Germany and referred as Messer Eutectic Castolin (MEC). In 2010, Larsen & Toubro Limited, bought the entire stake from Messer to become the wholly owned subsidiary of it. The current headquarters is in Ankleshwar, Gujarat (India), and the products are sold under the name EWAC.

In line with its strategy to

The share purchase agreement has been executed on October 11, 2017. The acquirer ESAB offers products for welding and cutting process. In 2012, ESAB was acquired by Colfax Corp., a diversified industrial manufacturing company based in the US.

Larsen and Toubro Limited was awarded the Hyderabad Metro Rail Project by Government of Andhra Pradesh.

The company has signed the Concession Agreement with Government of Andhra Pradesh on 4 September 2010 and completed the financial closure for the Project on 1 March 2011 in record six months.

A consortium of 10 banks led by the State Bank of India has sanctioned the entire debt requirement of the project. This is the largest fund tie-up in India for a non-power infrastructure Public Private Partnership (PPP) project.

The company will develop 18.6 million s.ft. of Transit-Oriented Development (TOD) and is expected to trigger robust economic activity in and around the city of Hyderabad and will generate substantial employment.[citation needed]

Larsen and Toubro Limited was awarded, and has commenced work on the Rs.

The company is also in the process of building major metro rail projects in the Middle-East.[23]

Established in 1990 as L&T-Rambøll Consulting Engineers Limited, the company became the wholly owned subsidiary of L&T in September 2014.

Today, L&T Infra Engineering is an independent corporate entity managed by a Board of Directors. The company enjoys complete freedom to set and pursue its goals, drawing, as and when required, on the technical and managerial resources of L&T Infrastructure Engineering Limited.[citation needed]

The company has a factory at Karai Village, Kanchipuram, that manufactures internal mixers and twin-screw roller head extruder's for the tyre industry, which commenced commercial operations on 1 December 2012.

L&T Infotech falls 1.74% on debut; first IPO to list at a discount in 4 months

In 2011, L&T decided to exit this joint venture and sold its share to CNH, and the company was renamed Case New Holland Construction Equipment India.

They also have a joint venture with Qatari company albalagh group which they jointly are the main contractors for alrayyan stadium, the 2022 FIFA World Cup stadium which will host matches up to the quarter-final.[29]

This became a division in 2011 after the company declared its restructuring[31] A partnership between L&T Finance and Sonalika Group farm equipment maker International Tractors Ltd in April 2014 provided credit and financing to customers of Sonalika Group in India.[32]

It offers design, development, and testing solutions across the product and plant engineering value chain, for various domains including Industrial Products, Transportation, Aerospace, Telecom & Hi-tech, and the Process Industries.

As of 2016, L&T Technology Services employs over 10,000 workers and has operations in 35 locations around the world. Its clientele includes a large number of Fortune 500 companies globally.[34]

L&T Valves Business Group has offices in the US, South Africa, Dubai, Abu Dhabi, India and China, and alliances with valve distributors and agents in these countries.

It is mainly headquartered in Faridabad with a manufacturing facility in Hazira and an engineering centre in Chennai and Faridabad. Currently, the group is engaged in projects for JVPL, MAHAGENCO, Nabha Power & RRVUNL.

L&T Howden is an ISO 9001 and ISO 5001 certified organisation, with a plant located in Surat Hazira and a marketing office in Faridabad.

is a joint venture between L&T and NPCIL, headquartered at Hazira. It is the largest integrated steel plant and heavy forging unit in India, capable of producing forgings weighing 120 MT each.

LTSSHF currently is engaged in projects from the nuclear, hydrocarbon, power and oil and gas sectors.[35]

In January 2011, Chairman announced that the company would be restructured into nine independent virtual companies.[45] with a CEO, CFO and HR head, its own profit and loss account, and board with at least three independent directors.

Each board does not have any legal or statutory standing,[46] but merely advises management.

The original nine virtual companies which operated in different segments,[47] were subsequently increased to 12, and they are:[48]

This later became a real company, with independent standings and stocks.

The company's shares constitute a part of BSE 30 Index of the BSE Limited as well as NIFTY Index of the NSE.[49] Its global depository receipts (GDR) are listed on the Luxembourg Stock Exchange and London Stock Exchange.[49] As on 31 March 2013, Financial institutions held around 30.5% equity shares in L&T.

Over 8.5 lakh individual shareholders hold approx 24% of its shares.[49][50] Foreign Institutional Investors held approx 16.6% shares. Others held approx 29% of the shares. Life Insurance Corporation of India is the largest shareholder in the company with 16.03% shareholding.[51]

54 Indian companies made it to the prestigious list, and L&T is the highest-ranked company in the engineering and construction section and 10th among all Indian public and private sectors.[54]