What is IPO / Schutzhund Training

Schutzhund (now known a IPO) is German for Protection Dog! This dog sport derived from Germany and designed to evaluate a dog's character rather than simply evaluating the dogs appearance for breeding.

Many breeds train for the IPO titles but the tests are demanding on the dog's ability to work under stress.

Before a dog can compete in IPO, it must pass a BH temperament test.

This tests the dog's basic obedience and sureness around strange people, dogs, traffic and loud noises. A dog that exhibits excessive fear, distractibility or aggression will not pass the BH and thus cannot attempt the IPO titles.

There are three IPO titles - IPO I, IPO II, IPO III and each title consists of three phases: obedience, tracking and protection.

Each phase is summarised below.

The tracking phase of each title includes a temperament test.

The dog is closely examined by the judge for stability and impartiality i.e.

neither hostile or fearful of strangers. The track is laid earlier by a person walking normally on a natural surface such as dirt or grass. The track is aged at least 25 minutes, includes a number of turns and small man-made objects dropped by the person laying the track. At the end of a 30 foot line, the handler follows the dog, which is expected to scent the track and indicate the location of the objects.

The tracking phase is intended to test the dog's trainability and ability to scent, as well as, its mental and physical endurance. The complexity varies for each title.

Various heeling exercises are performed in isolation and then amongst a group of people.

Gun shots are fired to test stability. During these heeling exercises the dog is commanded to sit, lie down and stand out of motion i.e.

while the handler continues to move forward. Recall to handler is performed from the various positions. 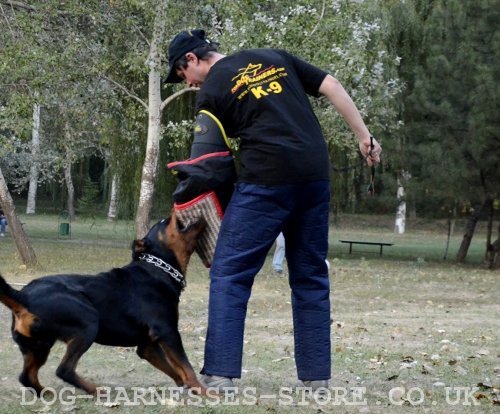 With dumbbells of various weights, the dog is required to retrieve on a flat surface, over a one-meter hurdle and over a six-foot 'A' frame. The dog is also asked to run in a straight direction away from its handler on command and lie down on a second command.

Each dog is expected to remain in a down position away from its handler at the other end of the obedience field while another dog and handler team completes the above exercises.