The hottest publicly owned Philippine company today is DoubleDragon Properties Corp.   In less than two years, the company’s stock price has risen more than 13-fold, from P2 per share in April 2014 when it conducted its IPO (initial public offering), to P26.80 as of yesterday, an astonishing gain of 1,240 percent for its investors.   Between March 3 last year and March 3 this year, DoubleDragon’s stock price more than tripled, from P7.73 per share to P26.80, a gain of 247 percent.

The Philippine Stock Exchange Index has lost 12 percent in points in the last 12 months. With ownership of 37 percent, Injap   is worth P22.2 billion, making him a veritable billionaire in peso terms, and a multi-millionaire (with $472 million) in US dollars. Injap’s dream is to make DoubleDragon Properties one of the largest, if not the largest, and one of the most profitable, if not the most profitable, realty company in the Philippines.

He plans to be the biggest mall developer in the country, with 100 CityMalls by 2020 by building malls at the rate of 25 malls per year. He will locate his malls in 80 percent of some 145 Philippine cities unserved by the likes of SM and Robinsons. These cities are two hours drive from Metro Manila or are in the Visayas and Mindanao where many areas growing faster than the national capital. 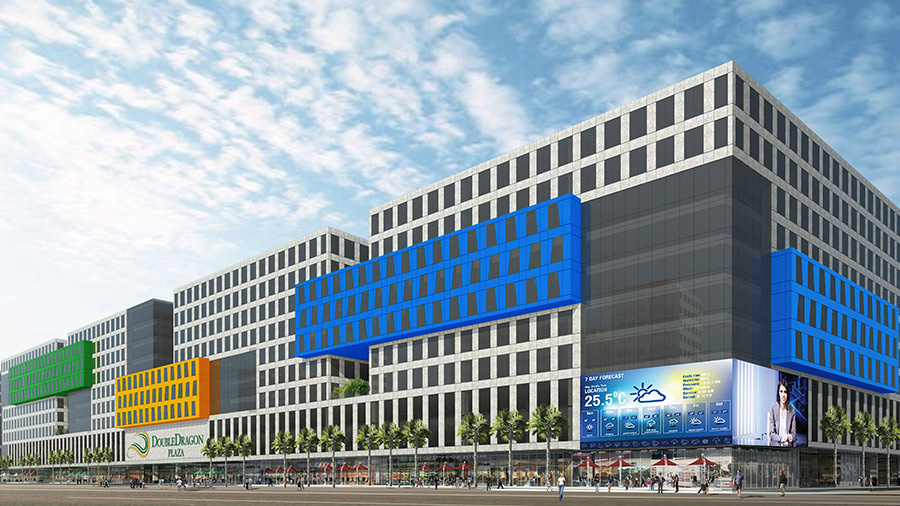 DoubleDragon CityMalls seeks to serve the so-called millennials, Filipinos who were born after 1980.   More than half of the Philippine population is young, below 25 years old. With 100 malls in five years, DoubleDragon will become one of the most profitable companies in the Philippines.   This year, the company is on track to record P1 billion in profits.   Over the next five years, profits are expected to rise 50 percent per year and hit at least P4.8 billion by 2020.

As a listed stock, DoubleDragon has defied bearish market trends.   The stock market has so far lost 12 percent in value since January. The bluest of the property companies, Ayala Land Inc., saw its stock price slump by 26 percent between March 2, 2015 and January this year, before recovering at its current price of P33.75, down 9 percent from a year ago. DoubleDragon Properties was founded in 2003 by Edgar “Injap” Sia II, 39, a college architecture dropout from Bacolod in west central Philippines.   He is the chairman and CEO of DoubleDragon.   At 33, six years ago, he became the country’s youngest billionaire, when he sold his Mang Inasal barbecue chicken food chain for P3 billion to Jollibee.   This enabled Injap to become a billionaire faster than Henry Sy Sr., John Gokongwei Jr., and Tony Tan Caktiong did in their time.

DoubleDragon Properties was a wholly-owned subsidiary of Injap Investments Inc. 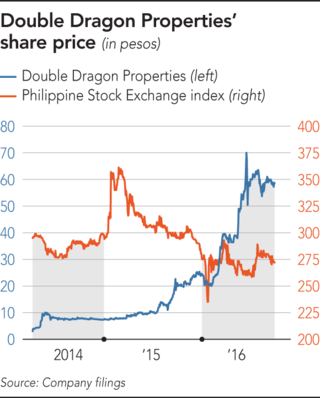 until July 2012 when Sia   formed a joint venture with Tan Caktiong, founder of Jollibee and buyer of 70 percent of his Mang Inasal. A third partner is the giant SM Investments Corp.

which owns 34 percent of DoubleDragon’s subsidiary, CityMall Commercial Centers Inc. As a property developer, DoubleDragon’s goal is one million square meters of leasable space in five years.   Of that, 70 percent will come from the 100 malls (each with an average leasable space of 7,000 sqm), while 30 percent (300,000 sqm) will come from a 4.8-hectare commercial block BPO and office building at the Mall of Asia called DD Meridian Park, with 280,000 sqms leasable, and the 40-story Jollibee Tower in Ortigas, with 47,909 sqm leasable.

The CityMall brand is thus poised to become the largest branded community mall player in the Philippines.   Twenty-five additional CityMalls are being constructed simultaneously across the country and are expected to be turned over to tenants by the end-2016.   DoubleDragon has secured 44 locations so far for its malls, reveals Sia. On DoubleDragon’s outlook, Sia says “Investors can see our vision makes sense, and maybe they are confident with our dynamic team to execute the laid out plans.” Also, “investors continue to have confidence in DD shares because they know we just started, and they can see DD will continue to be on a ultra high growth years for the next many years as we become a strong and great company.

Our thousands of shareholders will share that success in the long term. We are also relentless to build a truly great company that will stand the test of time and remain relevant for generations.” Injap is sure that the CityMall space will be leased.   “We have the strongest retail brands in the country,” he points out.

How to Make Money?

With 100 malls, Injap doesn’t think he would have competitors. He cites four factors—first mover advantage, familiarity of the provincial landscape (the malls will be located in third-tier cities, those with population of 100,000 or less and where the likes of SM and Robinson’s don’t have the time and the scale to be viable), the scarcity of prime city center sites (Injap says a big mall like SM needs about six hectares), and less operational baggage (DD is lean but mean).

“We will be the clear, dominant player in the community mall space,” Injap gushes. On the first day of DoubleDragon’s trading on April 7, 2014, its stock price rose spectacularly, by 50 percent, from P2 to P3. It helped that DoubleDragon was the first IPO of 2014, the boom year for IPOs.

As an IPO DoubleDragon was 14 times oversubscribed. Injap has certainly delivered on DoubleDragon. Note: I don’t own any DD stocks.   [email protected]

COMMENT DISCLAIMER: Reader comments posted on this Web site are not in any way endorsed by Manila Standard.

Message from the Executive Committee

Comments are views by manilastandard.net readers who exercise their right to free expression and they do not necessarily represent or reflect the position or viewpoint of manilastandard.net. While reserving this publication’s right to delete comments that are deemed offensive, indecent or inconsistent with Manila Standard editorial standards, Manila Standard may not be held liable for any false information posted by readers in this comments section.