The Periodic Table Of Cryptocurrencies 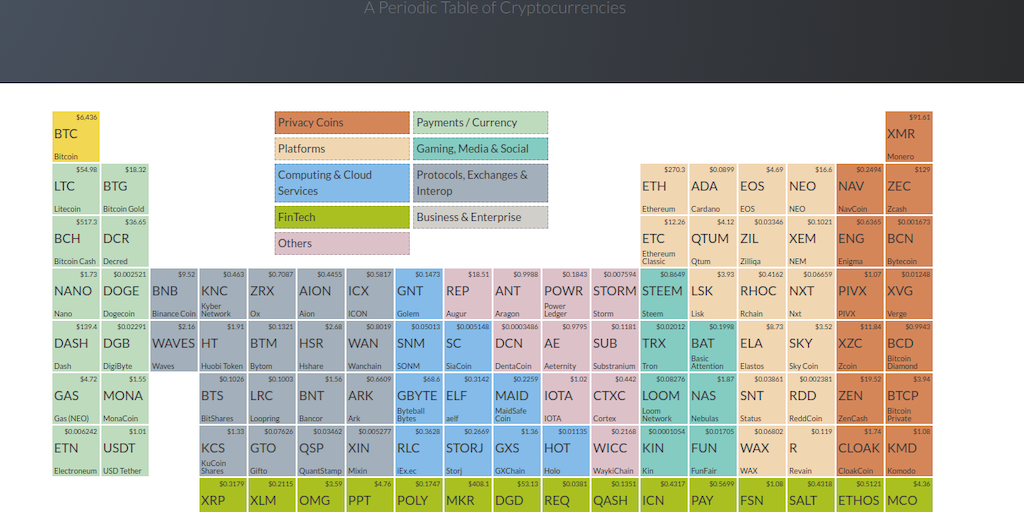 Coin analysis seeks to answer “Which coins are about to moon and which will drop away?” It’s a question all cryptocurrency investors are bound to ask.

A Periodic Table Of Cryptocurrencies

Below is a rough sketch as to how various coins performed for the month, as broken out by sector.

Aleksandar Arsov (original paper here), classifies 13 cryptocurrencies as ‘payment’ coins. Among them are Bitcoin, Litecoin, Dash, Electroneum, Bitcoin Cash, Bitcoin Gold, and Dogecoin. Bitcoin still reigns supreme and has been having quite a good run of late.

After being stuck in the $5800 to $6500 range for nearly a month, it suddenly shot up to the $7400 level. However, several analysts believe its real test will be breaking through a $7800 price resistance level.

How have the other 12 cryptocurrencies fared? Let’s cover their minor differences with Bitcoin first.

Litecoin is known for processing transaction blocks 4x quicker than bitcoin, Dash relies upon a global network of masternodes for governance (also known as a DAO), and Electroneum provides mining benefits to smartphone users.

Oh yes, and Dogecoin is gaining use in internet tipping.

Even Bitcoin’s namesakes seek to differentiate themselves.

For instance, Bitcoin Gold uses equihash rather than the more common SHA-256 as its proof-of-work algorithm (which may have rewarded the coin with a rare 51% attack). However, Bitcoin Cash has a larger blocksize and thus can process more transactions and at less cost than Bitcoin (though not as fast as Litecoin).

Surprisingly, neither Bitcoin Cash, Dash, or Electroneum have appreciably changed in price this past month.

Litecoin and Dash lost 14% and 3% for the month, respectively, The big winner here is Dogecoin (now priced at .$0.003845), whose price quickly jumped 21% after staying relatively flat during late June and early July.

Platforms- Among the most intriguing projects in the crypto-space are crypto-platforms.

Among the larger ones are Ethereum, Cardano, EOS, Ethereum Classic, NEO, QTUM, and Skycoin.

The original platform crypto project, Ethereum, is the most widely used platform, serving as the framework for operating 94 out of the top 100 coins. It also holds the highest market cap outside of Bitcoin. Nonetheless, EOS, Cardano, and NEO (“the Chinese Ethereum”) rank highly in market cap as well (ranking 5th, 8th, and 12th, respectively).

Unfortunately, nearly all platform prices declined in the past month. QTUM and EOS suffered the most substantial losses, both losing roughly 20% of their value.

A Periodic Table of Cryptocurrencies

Skycoin remained relatively unchanged. Only Ethererum Classic was able to buck the trend, rising 14% for the month.

Privacy- So-called “Privacy” coins are untraceable and seek to provide users with greater security and anonymity. Such coins prevent third-parties from discerning a user’s holdings, as opposed to what may be found in a semi-public ledger.

The Periodic Table of Cryptocurrencies

Crypto fans will recognize Steem as the social currency from Steemit, a social media platform designed to pay platform creators.

The publishing platform’s price remained relatively unchanged for the month (now at $1.55).

In late May, Tron launched its mainnet to great fanfare. The token’s mission is to “decentralize the web” and to that end, it recently acquired BitTorrent. The company hopes that its recent acquisition will help it revolutionize the entertainment industry.

In contrast, Basic Attention Token (BAT), which aims to revolutionize digital advertising with token payments, saw its price increase by 28% for the month (rising from $0.24 to $0.33). The brainchild of Firefox inventor Brendan Eich, the BAT token is meant to be exchanged between publishers, advertisers, and users in lieu of ads.

Financial- Among financial tech cryptocurrencies, two coins have separated themselves from the herd, namely Ripple and Stellar Lumens.

Wikipedia describes the former as a distributed ledger protocol for banks to settle international payments.

Although Ripple ranks third highest in market cap (below Bitcoin and Ethereum), it continues to slide in price, losing 11% of its value for the month.

In contrast, Stellar Lumens is backed by a not-for-profit foundation focused on promoting social justice and equitable distribution of wealth internationally. The Stellar team is currently planning to integrate their blockchain with the Lightning Network, a ‘second layer’ payment protocol designed to improve scalability and avoid network congestion. 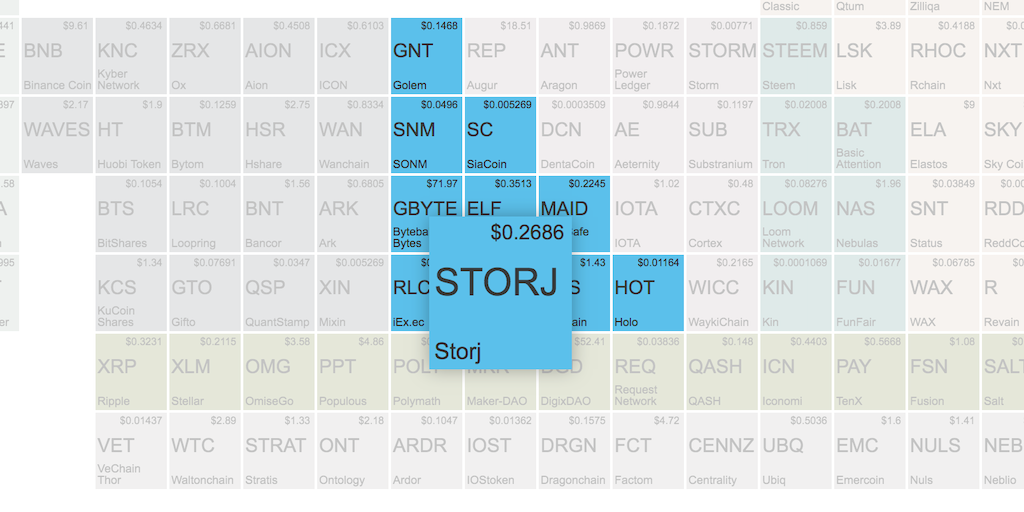 In the past month, Stellar Lumens price increased by 24%.

Finally, a note about OmiseGo, an ERC20 token designed to “enable financial inclusion and interoperability through the public, decentralized OMG network.” In other words, it’s an open payments platform intended to help the unbanked get banking services. OmiseGo is being listed here because it has achieved a billion dollar market cap.

Business- The business enterprise sector is home to such projects as VEChain, Stratis, and Ontology which both have exciting teams behind them.

By tracking items through the supply chain, VEChain aims to help retailers and consumers determine a product’s quality and authenticity (via both blockchain technology and smart chip technology). In the past month, its price has fallen by 47% (from $3.15 to $1.67).

Ontology’s use-case is harder to discern. The coin “builds the infrastructure for a peer-to-peer trust network which is cross-chain, cross-system, cross-industry, cross-application, and cross-device” (via whitepaper).

It seeks to create a public network of blockchains that can communicate with each other. Unfortunately, its price has fallen 46% within the past month (from $6.61 to $3.55).

It also enables smart contracts to be hosted on their own sidechain, thus removing any chance of disruption to the original blockchain.

In the present downturn, Stratis has done reasonably well by staying at roughly the same price for the month ($3.14 vs. $3.10).

As you can see, the leading coins within each of these cryptocurrency sectors showcase a specific use-case. Nonetheless, investors should carefully review their fundamentals and trading history.

Disclaimer: Content contained on or made available through this website is not intended to and does not constitute investment advice.

Your use of information on this website or materials linked from the internet is at your own risk.

The Periodic Table Of Cryptocurrencies